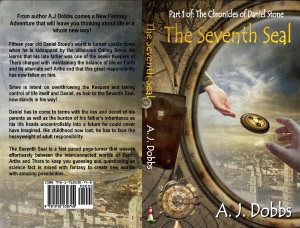 From author A.J Dobbs comes a New Fantasy Adventure that will leave you thinking about life in a whole new way!

Fifteen year old Daniel Stone’s world is turned upside down when he is kidnapped by the villainous Odling Smee. He learns that his late father was one of the seven Keepers of Thera charged with maintaining the balance of life on Earth and its alternate self Arthe and that this great responsibility has now fallen on him.

Smee is intent on overthrowing the Keepers and taking control of life itself and Daniel, as heir to the Seventh Seal, now stands in his way!

Daniel has to come to terms with the lies and deceit of his parents as well as the burden of his father’s inheritance as his life heads uncontrollably into a future he could never have imagined. His childhood now lost, he has to face the heavyweight of adult responsibility.

The Seventh Seal is a fast paced page-turner that weaves effortlessly between the interconnected worlds of Earth, Arthe and Thera to keep you guessing and questioning as science fact is mixed with fantasy to create new worlds with amazing possibilities…