On Friday 6th Nov. I had the pleasure of being interviewed and filmed by a 6th Form Student from my old school Cowbridge about the importance of literacy and libraries. Our audience was a lively and intelligent Year 7 class which included my daughter!

I had a fantastic hour with the staff and children talking about books, surrounded by books, in their fabulous library and I must pass on my thanks to my daughter for instigating it and Mr Monger for organising it.

Read my author interview on BooksGoSocial at : http://buff.ly/1kvFF4m

6 Keepers to rule us all,
1 boy to bind them,
3 worlds that rise and fall
and all our futures intertwine them

1 bad man, who won’t accept this state,
1 universal battle in a multi-universe state,
1 chance each day to live or die,
no luck or chance but on hope we fly

When I started to develop the worlds of Earth, Arthe and Thera it was with an underpinning of quantum physics. These ideas shook the world when first formulated and even Einstein could not rationalise what was proposed. Here’s my light hearted take on that struggle….

In Newton’s time an apple fell, it fell upon his head
he cried with glee, the science clear
of gravity both far and near
to new laws of science he was led

But wait said Bohr, of what Newton saw
that apple wasn’t real,
it may have hurt, and led him to blurt,
those laws that made him famous

But dear Sirs, until it’s observed
nothing in this world of ours, exists
Einstein cried, “God does not play dice”
this idea of yours Bohr, is short of sight

Schrodinger said, lets all think calmly
If we agree with Bohr, the world will think us balmy
Now think of a cat, in a box
the lid is closed, and let’s take stock

The state of my fictional cat, Bohr would have us believe
is both dead and alive with equal uncertainty
this cannot be, by all that we know
this quantum madness has to go

But time would serve Bohr’s madness well
Things in two places at once, is now what science tells
So the cat in the box is both alive and dead
A true paradox that will forever mess with your head

Like a plucky new recruit, The Seventh Seal crossed the threshold of four local libraries today and will soon be available on their shelves. Cowbridge, Penarth, Llantwit Major and Barry, all in the Vale of Glamorgan, have a new addition!

The Seventh Seal is an exploration of conflicting ways of life. On the one hand we have the Keepers of Thera, pragmatic and largely devoid of emotion. In Odling Smee, the books antagonist, we have a man who desires power. He wants to cut free himself and the people from the governance of the Keepers and replace it with his own form of control. He uses what is inside us all to galvanise his force; self-interest. A good example is in the first chapter when he is addressing his men:

‘Men, the time is nearly upon us to reach for our destiny, to channel our hopes and dreams, to control the power of the regulus and free us from the control of the Keepers. You have all been loyal to me and I hope as we enter this final stage that you will be rewarded by all that life can offer. It is my time, it is your time. Let us prepare for the Keeper and give him the welcome he deserves.’

In using this structure I’ve largely followed the classic Greek Apollonian and Dionysian philosophy. Apollo and Dionysus are both the sons of Zeus, Apollo the god of reason and Dionysus the god of chaos. The former appealing to logic and reason, i.e. balance and the latter to ones emotions and instinct for life; the tension created between the two is the engine that drives the story.

Had a nice boost today when my daughter came home and told me that her Year 6 will be reading The Seventh Seal this year! Happy days 🙂 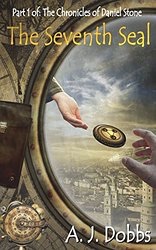 Let me introduce you to one of The Seventh Seal’s canine characters, Rosie. That’s not a growl by the way, she’s smiling! I swear with a bit more practice she could talk 🙂 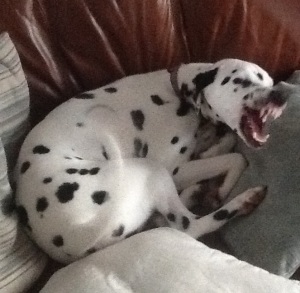 A.J. Dobbs
Create a free website or blog at WordPress.com.